Bontrager made significant claims about the efficacy of its licensed technology, stating that it’s “up to 48x more effective at preventing concussions” than a regular EPS helmet. Furthermore, Bontrager claimed that “adding the WaveCel technology reduced [the incidence of concussion] to 1.2%,” and, via Bontrager’s website, said that “nearly 99 out of 100 times,
WaveCel can help prevent concussions.”
According to MIPS, such claims are impossible to make as no two crashes are the same and no two people are the same. However, rotational motion itself can be measured objectively, so that is the metric MIPS reports and addresses.
MIPS tested the helmets with commonly used test methods for helmets in angular fall and following the same test protocol as WaveCel. When tested at the speed of 4.8m/s MIPS found no difference in risk injury reduction between helmets equipped with WaveCel and those helmets just equipped with EPS foam. In the 6.2m/s impact case, there was a slight reduction,

One possible reason for the very different results could be that WaveCel used the so called HIII dummy neck in its test (“Bliven” (1)). The use of this neck for oblique helmet testing has been questioned and the HIII dummy neck isn’t used by Virginia Tech, MIPS nor FIM (Fédération Internationale de Motocyclisme) in their testing protocols. The HIII dummy neck was designed for automotive crash testing. It was neither developed nor validated for compressive loading as used in the Bliven study. The neck has been found to be too stiff in compression in several independent studies [2-4]. For this reason, the test setup used in the Bliven study must be questioned and MIPS didn’t use the HIII dummy neck in the comparative test to keep the test as close to an industry standard as possible. 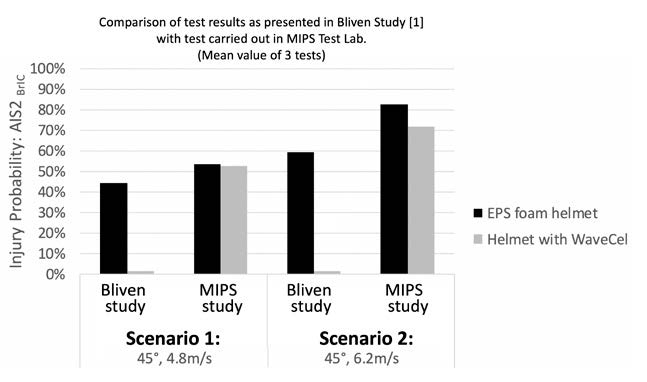 For more in depth information on how MIPS conducted this test, please contact the persons stated below to book an interview with MIPS CSO, Peter Halldin.“Our leadership in the field of brain protection
solutions is rooted in decades of scientific research by neurologists and biomechanical engineers at the top of their field,” says Johan Thiel, CEO of MIPS. “We value the collaborative process inherent to
research and testing, knowing that a deeper
understanding of safety will contribute to further improved consumer protection.”While MIPS finds it encouraging that more and more helmet brands are acknowledging the importance of reducing the effects of the damaging rotational motion, MIPS are concerned that there is still a lack of an industry-wide standard from third party testing organizations to ensure accurate information for consumers – something MIPS called out earlier this month. The lack of a standard increases the risk of unsubstantiated claims which could cause consumer confusion and in worst case put consumers at risk.[1] Bliven E, Rouhier A, Tsai S, Willinger R, Bourdet N, Deck C, Madeya SM, Bottlang M. Evaluation of a novel bicycle helmet concept in oblique impact testing. Accident Analysis & Prevention, Volume 124, March 2019, Pages 58-65.